(Courtesy: The Yivo Encyclopedia of Jews in Eastern Europe)

A city on the Hnylopiat’ River (Dnieper basin), Berdychiv (Yid., Barditshev; Rus., Berdichev; Pol., Berdyczów) is the district center of Ukraine’s Zhytomyr oblast. From 1569 it belonged to the Polish–Lithuanian Commonwealth; from 1793 the town was in the Volhynia province of the Russian Empire and from 1844 in Kiev province (district center from 1846).

In 1593, there were 140 homes in the newly populated town, and a Jew leased a mill and held the right to collect the levy on goods transported over the causeway. However, the community’s development did not begin until the eighteenth century.

From 1710 the town’s owners, the Radziwiłł family, engaged in renovating Berdichev and attracting more residents. They granted Jews leases for the right to produce alcohol and engage in other trades and crafts. In 1732, they granted the Jewish tailors’ guild autonomy from the kahal (Jewish communal government), including the right to build an annex to the synagogue and conduct their own prayer services there.

From about 1765, Berdichev became the largest commercial center in eastern Poland, and this rapid growth was accompanied by an increase in the Jewish population. According to census figures, there were 1,220 Jews in Berdichev in 1765; 1,514 (360 homes) in 1787; and 1,951 in 1789 (the total number of community members was 2,460, including Jews from neighboring villages).

Among the first adherents of Hasidism in Berdichev was Aleksander “the Shoḥet” (d. before 1773), who was the Ba‘al Shem Tov’s scribe and father-in-law of Dov Ber of Linits (Il’intsy). In 1785 the tsadik Levi Yitsḥak ben Me’ir (1740–1809) took up residence in Berdichev and transformed the town into one of the most influential centers of Hasidism. Thus, the 1802 gathering of prominent tsadikim and other Jewish leaders—called to discuss means of opposing impending government restrictions on Jews—took place in Berdichev. In the course of the nineteenth century a number of different Hasidic communities were established in the town.

Berdichev’s Jewish districts were characterized by dense concentrations of buildings and a well-developed network of cellars. Zolotaia ulitsa (Gold Street), lined with banking establishments and commercial firms owned by Jews, became the town’s main artery. By the middle of the nineteenth century, the number of Jews in Berdichev exceeded 25,000 (70% of the town’s population). About 3,000 Jews were merchants and another 4,000 were artisans—tailors, cobblers, stovemakers, cabinetmakers, jewelers, blacksmiths, and the like. By 1861, there were 46,683 Jews in Berdichev, making it the second most populous Jewish community in Russia. During the second half of the century some Jewish firms transferred their activity to other cities, mostly Odessa and Kiev, and the town’s position diminished steadily. 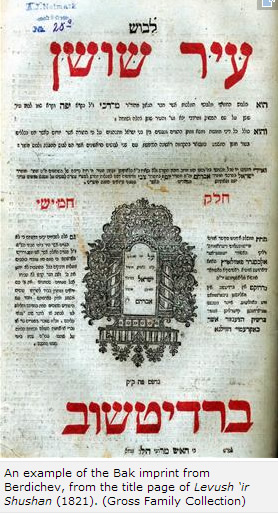 Between 1802 and 1817 the pedagogue Tuviah Feder and rabbi Yehoshu‘a Heshel of Chełm organized a circle of maskilim in Berdichev. In the 1820s, Yitsḥak Ber Levinzon led the Shoḥre Or ve-Haskalah (Society of Adherents of the Haskalah). In the mid-1840s, the maskilim sponsored a public library and opened a private school in which Jewish and general disciplines were taught; in 1856 they established a boarding school for girls. These activities were supported by representatives of the commercial and intellectual elite.

During the early decades of the nineteenth century, the town was one of the leading centers of Jewish book publishing in Russia (the first printing press in Berdichev had opened in 1798). From 1858 to 1869, the writer Sholem Yankev Abramovitsh (Mendele Moykher-Sforim) and other maskilim organized a club, Bet Raḥel, and in 1860 they founded a choral synagogue (the building on the former Makhnovskaia Street has been preserved).

There was, however, strong opposition to the Haskalah and its adherents, particularly among Berdichev’s Hasidim; this resistance was encouraged by wealthy merchants Yisra’el and Ya‘akov Yosef Halperin. In the 1850s and 1860s, with the help of the local intelligentsia, two Jewish state schools were opened. In 1890, both the Misnagdim and the Hasidim supported the opening of a yeshiva headed by Aryeh Leib Gordon.

During the second half of the nineteenth century, intensive commercial development began in Berdichev, with both domestic and foreign Jewish capital being attracted to the town. Between 1860 and 1870, nine Jewish-owned leather processing plants were opened; in 1877 a machine-building plant was founded; and in the 1890s a porcelain-making plant, three brickyards, a Viennese furniture factory, and several dozen other light industries and food processing enterprises belonging to Jews were established. A railroad branch line laid in 1870 connected Berdichev with major train junctions.

There were 41,617 Jews in the town in 1897 (about 80% of the population). Approximately 2,000 Jews worked in industry and 6,000 in crafts, but about 30 percent of Jewish families depended on charity. The network of charitable institutions included an almshouse, a hospital, a maternity hospital, an orphanage, a society for helping needy Jews, and a mutual aid fund.

By the beginning of the twentieth century, Jewish political life in Berdichev was flourishing. A regional Zionist conference took place there in 1901, and in 1902 a Bund committee was established; by 1905 it had as many as 7,000 adherents. The Jewish population declined during the time of World War I and the Russian Civil War—from 55,876 in 1914 to 29,778 in 1920.

After the revolution, Jews held leading positions both in municipal and in Communist Party organs. From 1924, the town boasted a court, and from 1926, a militia commissariat that conducted its work in Yiddish. Jewish educational institutions included four schools offering general education, as well as three professional schools. Activities of the Kultur-lige continued until the beginning of the 1920s. In 1922, ORT agricultural courses were opened, and in 1925, a Jewish rabfak (college-level preparatory department for working youth) and a Jewish evening school for Soviet and Party workers were established. Der arbeter (The Worker) and other newspapers in Yiddish were published until 1935.

Zionist youth groups operated illegally until the mid-1920s, as did a Lubavitch-sponsored yeshiva in the mid-1930s. During the 1920s and 1930s, almost all of the synagogues and prayer houses (about 80) were closed. The Militant Atheists Club was organized in the choral synagogue. During the second half of the 1930s, all remaining Jewish cultural and educational institutions were shut down.

On the eve of the Nazi occupation, about 30,000 Jews lived in Berdichev, including refugees from recently annexed Polish territories. Several hundred families managed to escape before Nazi troops occupied the town on 7 July 1941. During July 1941, Nazis shot about 1,000 Jews. A ghetto was set up and sealed by 22 August 1941. Aktions to exterminate Jews continued throughout August and September. On 15 September alone, more than 15,000 Jews were murdered; only physicians, pharmacists, and skilled craftsmen were spared. By 3 November 1941, all the Jews who had remained in the ghetto were killed, except for 150 craftsmen who were placed in a camp at Lysaia Gora and executed on 16 July 1942. Altogether, Nazis murdered about 30,000 Jews from Berdichev and nearby villages. Soviet troops liberated the town in January 1944. 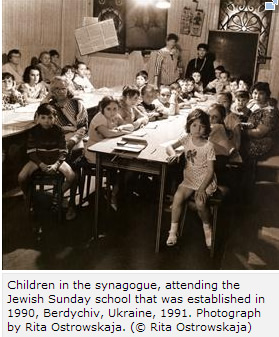 By mid-1944, more than 80 Jewish families lived in Berdichev, and in December 1946 a synagogue opened. The community had a cantor, mohel (ritual circumciser), and shoḥet (ritual slaughterer). Approximately 6,500 Jews lived in the town in the 1960s. In the 1980s, memorial plaques were placed at the sites where Nazis had conducted mass shootings.

A Jewish cultural society was organized in Berdichev in 1989, a Sunday school in 1990, and a Maccabi club in 1991. The community synagogue was supplied with a mikveh (ritual bath) and a kosher kitchen. In the mid-1990s, the Lubavitch and Progressive Judaism movements organized religious communities. In 1997, about 800 Jews were living in Berdichev, including more than 450 pensioners.

Translated from Russian by I. Michael Aronson