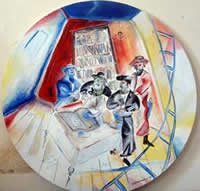 The meeting in Rovno was stormy and eventful. The disciples of Rabbi DovBer, the Maggid of Mezritch, the successor to the Baal Shem Tov,1 were greatly agitated. They felt strongly that the mitnagdim, those Jews opposed to the Chassidic movement, had over-reached all bounds of legitimacy.

The Maggid himself kept silent. Though filled with empathy for his followers, he thought that it was nevertheless better not to answer or react to the events. “Truth stands, falsehood does not stand,” thus surely time itself would contribute to the vindication of the truth and authenticity of Chassidism. He counseled patience and forbearance. Already in the days of the Baal Shem Tov, he had joined with his master in a declaration “to forgive fully and absolutely, as Scripture (Psalms 104:35) states ‘let sins be annihilated,’ not the sinners.”2

He taught his followers “an important rule: When people shame you with respect to your form of worship or other good things, do not answer them anything lest you become involved in an argument and are led to pride which will cause you to forget the blessed Creator. Our sages taught that man’s silence leads to humility.”

In the midst of the proceedings Rabbi Levi Yitzchak of Barditchev received a report vividly describing the personal harassments and sufferings his family was compelled to endure. His colleagues decided that Rabbi Levi Yitzchak should read out this letter in the presence of the Maggid, but even as he did so Rabbi DovBer remained silent. The disciples interpreted their master’s silence as an indication that the matter was up to their discretion and thus decided to act on their own.

They met secretly and resolved that it was their legal duty to defend and guard the honor of their holy master and to combat the unjustified denunciations. It seemed there was but one thing they could do: to abide by the stipulation in Jewish law to meet an illegitimately proclaimed cherem (“ban”) with a counter-ban. Their meeting concluded with a quorum of ten men rising to proclaim a counter-anathema3 against the denunciators of Chassidism.

When the Maggid heard of this action he was dismayed and admonished his disciples most severely. Upon their retort that they were no longer able to endure the persecutions and saw no alternative, Rabbi DovBer replied:

“Know that by the action you have taken you have forfeited your head. However, at the same time you have gained that henceforward whenever there will be a conflict between the chassidim and their opposers, the chassidim will prevail.”

The Maggid’s disciples had achieved a victory but at a costly price. Within half a year they would lose their head, the crown of Chasidism, i.e. Rabbi DovBer, the Great Maggid of Mezhrich.

Some two months later the Maggid lay gravely ill. Many of his disciples hurried to Annopol to be at their master’s bedside. On the last Shabbat of his life, the 16th of Kislev, he interpreted the first verse of that day’s Torah reading (Genesis 32:4), “And Jacob sent malachim,” to the disciples standing around his bed: “Rashi interprets (that malachim means) “angels mamash” (real angels). That is, Jacob sent the mamash (the concrete reality) of the angels, but the spirituality of the angels remained with Jacob.”4

The next day, Sunday the 17th of Kislev, the Maggid said to his disciple, Rabbi Shneur Zalman5 that the last three days before one restores the ‘deposit’ (i.e. the soul entrusted into man’s charge) one sees but the creative word of G-d inherent in every physical thing, that is, one sees that the word of the Creator is the very essence and reality of matter.6

The following day the Maggid told Rabbi Shneur Zalman privately: “Zalman, see to do whatever you can that my Avromenyu9 remain in my seat. If, Heaven forefend, he should refuse, then let it be Mendele the Litvak” (Rabbi Menachem Mendel of Horodok/Vitepsk).

His son, Rabbi Abraham, recalled other things the Maggid said that day in the presence of himself, Rabbi Judah Leib Hacohen and Rabbi Shneur Zalman: “My children, hold together and then you will overcome everything; you will then progress even further and not regress, Heaven forefend.”

Afterwards, Rabbi Zusya also came and the Maggid asked who entered. Rabbi Zalman answered “Rabbi Zusya came,” and the Maggid indicated with his finger that he should approach. He grasped him with his right hand and said to him as follows: “You Zusya, you are mine in this world, and over there you will also be next to me, just as the body and soul [are joined].”

He then asked whether Rabbi Mendele of Vitebsk was present to which Rabbi Zalman answered that he was not. He sighed deeply and asked whether Rabbi Judah Leib Hacohen was there and Rabbi Zalman answered in the affirmative. He looked at him and said as follows: “You too will be in my compartment, ‘for the lips of the Cohen (priest) are to keep da’at–knowledge’ (Malachi 2:4), and I am of the realm of da’at.”

Thereupon he called out “Zalmina, Zalmina,” and said as follows: “You will stand alone.10 However, I will see to drag you out of all your troubles because for you I will truly long.”

Then he said as follows to his son: “And you Avromenyu, you just keep silent and continue to conduct yourself as you have done until now. Listen to Zalminyu and it will be well with you. Above all, do not afflict yourself, for a small defect in the body causes a large defect in the soul–and your soul is something altogether unique.”

He then wished his disciples a good night and went to sleep.

On Tuesday, the third day in the week of the Torah-section Vayeshev Ya’akov, on the nineteenth day of Kislev 5533 (1772), Rabbi DovBer, Maggid of Mezrich, Koretz and Rovno, successor to the Baal Shem Tov and leader of the Chasidic movement, returned his soul unto his Maker, and his earthly remains were interred in Annopol.

For unto the righteous, the day they are able to restore their soul in purity and sanctity is not a sad departure from one world but a joyously anticipated homecoming to another. Like Rabbi Shimon bar Yochai of old, Rabbi DovBer, too, regarded the day of his passing as a Yomtov for himself and wished that his disciples and followers rejoice with him.

FOOTNOTES
1. Rabbi Israel Baal Shem Tov (b. 1698) founded the Chassidic movement in 1734; following his passing in 1760, his disciple, Rabbi DovBer of Mezritch, succeeded him as the movement’s “rebbe” and leader. Chassidism initially met with vehement and even violent opposition by the Jewish establishment.
2. I.e., one should pray not that wrongdoers should perish, but rather that they should repent–Talmud, Berachot 10a.
3. See Shulchan Aruch (Code of Jewish Law), Yoreh De’ah 334:39, and cf. also ibid., par 16.
4. For an explanation of the Maggid’s discourse, see the Lubavitcher Rebbe’s Likkutei Sichot, vol. X, pp. 100-108. See also Actual Angels and Your Soul Can Be in Two Places.
5. Rabbi Schneur Zalman of Liadi, 1745-1812, founder of the Chabad branch of Chassidism.
6. See The Ascent of the Tzaddik, describing Rabbi Schneur Zalman’s own passing forty years later.
7. Chazon Ovadyah — “The vision of Obadiah…” is the opening words of that week’s haftorah (reading from the prophets). The name “Obadiah” means “servant of G-d.”
8. Indeed, a year later, on the 9th of Kislev 5534 (1773), fourteen years after their marriage, Rabbi Shneur Zalman and his wife were blessed with their first child who was named after the Maggid and, after succeeding his father in 1812, became famous as Rabbi DovBer of Lubavitch.
9. The Maggid’s son, Rabbi Abraham “the Angel.”
10. Perhaps an allusion to the Chabad-school of Rabbi Shneur Zalman which differs markedly from most of his colleagues.