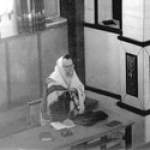 It happened in Berditchev. On the first day of Rosh Hashana, during the repetition of the Shacharit prayer. In the shul of the great tsaddik, Rabbi Levi Yitzchak.

The Rebbe himself was leading the service. His sweet yet powerful voice permeated the shul, stirring the soulstrings of all present and churning their emotions. Each person felt as if he was standing at that moment before the Throne of Glory Tears streamed down many faces. Everyone was inspired to pray with much greater focused intensity than usual, from the depths of their hearts.

Just before Kedusha, when he started to intone the prayer that begins with the words, “L’ei-l orech din”–”to G-d who conducts judgment,” the tzadik’s voice quivered. A current pulsed through the room. Every heart pounded as the holiness and seriousness of the occasion seemed to be climaxing. Each person felt as if he was standing at that moment before the Throne of Glory, and the Judge of the World was measuring and weighing their deeds of the past year as His gaze penetrated every heart and secret thought. The Rosh Hashanah judgment was about to emerge!

When he came to the words of one of the final couplets, “L’koneh avadav b’din”–”Who acquires his servants through judgment.” R. Levi Yitzchak’s voice cut off. He stood as if frozen in his place. His face turned white as a sheet. His eyes bulged. As his talit began to slip off his head, it seemed as if his soul had flown off to higher realms.

All eyes riveted upon the Rebbe. Everyone shook in fear. What will be, what will be?

The veteran Chassidim, however, realized that something special must be happening, even if they couldn’t perceive it. With great joy he called out confidently — Who acquires his servants through judgment They concentrated on thoughts of teshuva, of regret for the past and good resolve for the future.

A few more seconds went by. Then, the color returned to the tzadik’s face. It was as if he had been restored to life. His face shone. With great joy he called out confidently, “L’koneh avadav b’din”–”Who acquires his servants through judgment.”
After the prayers, at the holiday meal, one of the elder Chassidim mustered his courage and directly queried the Rebbe, “what happened during Shacharit? Did you see something in the upper worlds?”

Not one present ever forgot the Rebbe’s extraordinary reply.

“I saw the Accuser carrying a huge sack on his back. Right away I felt uneasy. I realized that it was full of the sins of the Jews that he had managed to accumulate over the course of the year.

“I went over and peeked in to see what he had. Let me tell you, there was a full assortment: some nasty lashon hara talk, stinginess, baseless hatred, wasted time that could have been used for Torah study, and so forth and so on ad nauseum. Big ones, little ones–the sack was bulging and the Accuser was gleefully galloping toward The Throne. As I took each particular sin and considered it in the light of these thoughts, it melted in my hand and disappeared as if it had never been!
“ ‘Oy!’ I thought to myself. ‘What can I possibly do?’ I couldn’t come up with any plan. My spirits sank.

“Suddenly the Accuser stopped short. His sharp eyes had detected a Jew committing a sin on Rosh Hashanah itself. He dropped the sack and jumped off to pick up this new juicy item to top off his collection.

“As he disappeared from sight, I decided to look in his sack again to get a closer look at what he had. I went over and started examining the different transgressions. I quickly saw that the Jews who had done these things weren’t really so guilty. The bitter harshness of the exile, their bleak poverty, the oppressive negative influence of the dominant cultures in which they lived and other extenuating circumstances all combined to coarsen the Children of Israel and seriously weaken their Jewish identity and commitment, until finally they were mired in the filth and unable to resist temptation. Those poor Jews! What could be expected of them? And anyway, what could these puny errors weigh against the callous murder, immorality and theft in which the host nations were sunk.

“As I took each particular sin and considered it in the light of these thoughts, it melted in my hand and disappeared as if it had never been! The pile shriveled and shrank, and soon was all gone.

“Just then, the Accuser returned. When his glance took in the empty sack, he shrieked grievously, ‘Thieves! Gonevim! They stole all my Jewish sins that I worked so hard to amass.’

‘Then he spotted me. He recognized right away that it must be me that would do something like this to him. He flew over and grabbed me by my beard!

“Now, you should realize that when it comes to knowing Torah, the Accuser is no slouch! He demanded that I pay him back for what I stole, and not only that, but that I was obligated to pay him double! When I answered him that I didn’t have anything to pay him with, he quoted the verse, ‘if the thief can’t pay back, he is sold into slavery.’ …only by serving Him can we escape the clutches of the Accuser
“With that, the Accuser seized me firmly and dragged me off to sell me. The first angel we encountered, though, adamantly refused to buy me. A Jewish slave? No way! It is too much responsibility. He’d be obligated to feed me and provide for my other needs, and at the same time have to worry about getting caught in false accusations and other problems. ‘He who acquires a Jewish slave acquires a master for himself,’ he quoted. ‘Even if he were free I wouldn’t take him,’ he finished.

“So the Accuser offered me to the next angel we came upon, and to a third and to a fourth. No one wanted to buy me. No one was interested at all.

“Deciding it was hopeless, the Accuser took hold of me again and pulled me right up to the Throne of Glory, and set forth his case before the Al-mighty Himself! When he finished a voice was heard. ‘ “I have made you and I shall carry; I shall sustain and I shall deliver”–I will buy him from you, O Accuser.’

“The Accuser stood slack-jawed. All his complaints were silenced.

“At this point I revived, as you saw for yourselves. And now you know the explanation of ‘Who acquires His servants through judgment’: we are all servants of the Al mighty, and only by serving Him can we escape the clutches of the Accuser. So let’s do it!” concluded the tzadik dramatically. “And in the merit of doing so, surely we will be inscribed and sealed for good.”