For some time now (several years), I have felt that God has been knocking on my forehead, so to speak, to visit the town of Tarashcha in the Ukraine. Tracing my great-grandmother and my grandfather to this town, through family legend and then through the Ellis Island database, I was able to verify that this, indeed, was the town they were from, not far from Kiev.
I had been to the Soviet Union before and had visited Kiev twice. But Tarashcha had been out of bounds for Americans at those times.
I had begun learning Russian in the tenth grade because of…a tea box. My father was sorting through some stuff in the basement and gave me this Russian tea box…and from that, everything else followed. 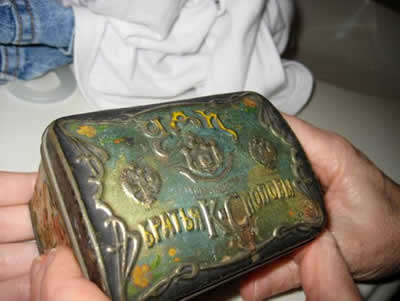 The tea box that started it all

I decided I should go. I’m not going to get any younger, the trip wouldn’t become any easier. So I went, taking my daughter, Hannah, to help me along. I’m glad I did. I learned so very much. Mostly I learned how I deeply grateful I am to my great-grandparents and grandparents for taking that unimaginable leap of faith and bravery that it took to leave everything they knew, cross an ocean and come to a country they’d never seen, learn a new language and begin making a life from scratch. For I saw most graphically what would have become of them had they not made that leap.
There was a major influx of Jews into Tarashcha in the Ukraine in about 1850, said our local guide. It was a city laid out on a grid. There is only one Jew there now: an old woman in a broken-down house with a yard with a barking dog and some cats. She’d come there after 1945 and didn’t know anyone from before the war. The guide said that Jews owned the flourmill in Tarashcha and it was turned into an engine plant. I didn’t think to ask where the synagogue had been and if it was still standing in some form. The head of the town knew Jews with these last names: Donsky, Katz, Livak, Promislovska, Matushiv, Budnik, Truber and Altman. Yevgenei Yaklovich Altman headed the agrarian school. Skvirski was the first to go to the United States.
The town is in a state of disrepair. (Witness how much the buildings behind this woman look like “Anatevka”.)

The guide told us that the asphalt path down which we walked had been made for an Israeli delegation that came 10 years ago. I would be grateful to anyone who can help me identify any of these Israelis, the help would be greatly appreciated. The guide also said that there were underground tunnels that the Jews used to get to the river and escape but we couldn’t go down into them, as they were unsafe now. Does anyone know of anything like this?

In the graveyard, there were some Soviet-era graves but none with my family’s name, Zabara, on them. The older gravestones had toppled over and were fading into nature. There was also an ohel, a pavilion of sorts, over the grave of a sage. It had been put up in since Ukrainian independence (17 years). Then, our local guide took us down a path into the woods…deeper and deeper into the wood.

It was beautiful and the woods grew more and more overgrown. Then we turned left and there, in a shaded grotto, was something I did not expect: a black obelisk memorial, in Hebrew and Russian, with the hammer and sickle, so it was pre-independence.

The place was so deep in the woods, you might live your whole life in that town and never know it was there. And it was beautiful…as are so many such sites, I’ve read. The guide said that, with the help of the Ukrainian police, the Nazis led the Jews up to the ledge some forty feet above us and shot them into this pit, some 1000 in all.

I looked up to the top of the ravine and said, “This is where my grandfather would have died.”
So this was how it was done, I thought: not in front of everyone, when someone might interfere. You led people into the woods…for resettlement or a work detail; who knows what they told them. But you’d have been able to hear the shots from the town. But then, shots must have been a terrifyingly common sound in 1941 Ukraine. We said kaddish there and left a stone on the monument. They called this place the Tarashcha Babi Yar.
That night, I had a dream that summed the day up as only dreams can do. It was about muppets, being violent in their funny, unthreatening way. There was one muppet character that all the others wanted to kill. Each muppet character took a turn trying to kill this one character…but the character just wouldn’t die. We Jews are that muppet that just won’t die. The experience of the Jews in the Pale of Settlements is one in which regime after regime has had their turn trying to kill us…and they just can’t do it.
We also visited Babi Yar, the great killing ravine in Kiev. But we were surrounded by traffic and its pollution and noise. There are numerous memorials there, the largest being the one put up by the Soviets in 1976. It shows a strong Soviet civilian protecting cowering figures behind it. Sadly, many people we saw were using the place as a park, some drinking.

“Your brother’s blood cries out from the ground” Babi Yar
It is clear that independence has wrought great changes in the Ukraine. People pointedly speak Ukrainian, not Russian. The statue celebrating Ukrainian independence is a marked counterpoint to the Soviet-era statue of the Ukraine with her sword. And the Ukraine has imported so much of American culture: McDonalds, Coca Cola, Reebok…and cars. But it seems that they don’t make the connection between abandoning mass transit in favor of cars and the noise, pollution and inconvenience of snarled traffic.

One thing struck me quite forcibly: I could pass for a Ukrainian. Just about everyone, it seemed, had green eyes and light brown hair. My daughter, on the other hand, has dark hair and deep brown eyes. It made me realize that it would be easy to pick someone like her out of a lineup as Jewish while I might be able to slip through the net.
On Sunday, I taught a Talmud study session arranged through Project Gesher, an outreach organization to women in the former Soviet Union in a liberal synagogue in Kiev. Rabbi Alexander Dukhovni gave us a warm welcome. We had about 15 participants in the session, learning Mishnah about the 17th of Tammuz and the upcoming 9th of Av. My first shock, and disappointment, was the news that Rabbi Steinsaltz has stopped producing his translation of the Talmud into Russian after just a few volumes of Baba Metsia. At least a translation of Mishnah into Russian must be undertaken if Jews are to be able to unlock the treasures of rabbinic literature. The participants were exceptionally thirsty for knowledge and kept me on my toes. I will treasure the apron and cookbook from Project Gesher which they gave me.
On Sunday we also toured the street with all the tourist stalls. It was quite a shock to see pictures of Jews that seemed to reflect supposedly-gone stereotypes. Even more shocking was seeing the Nazi eagle and swastika…but then we realized these were old pamphlets and notices from 1941 when the Nazis first came through. God knows how or why they were preserved.