(During the Russian Empire and after the Revolution of 1917) 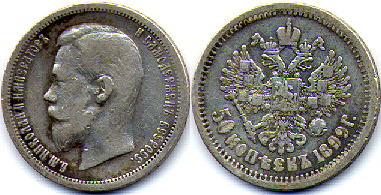 The 100 Ruble banknote of 1910
From the late 18th century until 1917 the Krim (Crimea) peninsula and the mainland portion of Taurida Oblast (province) was part of the Russian Empire, and used Russian currency. The Russian empress who conquered the territory — Catherine II (known as Catherine “the Great”) — was memorialized on Russian currency, along with notable Tsars such as Peter I (also honored with “the Great”).

The one Ruble banknote
Imperial Russian designs for paper money were generally of high quality. However, the one Ruble and Kopeck notes were issued with utilitarian designs of little artistic merit. On the one Ruble note the architectual motif is reduced to the facade of a nondescript generic structure.