* Kvas is a drink, made familiar in the stories of Shalom Aleichem.

After visiting the small town of Skvira and the villages of Ruzin, Yagniyatin and Karabchiev, we arrived in Berdichev armed with a small schematically drawn map of the town, which we copied from a forty years old memorial booklet to “Jewish Berdichev. The “we” refers to my father [born Berdichev 86 years ago], my husband and myself. We spent two days in town, dividing our time between visiting old Jewish sites and exploring Levy Itzchak of Berdichev’s [LIOB] cemetery. The following is a very brief description of the Jewish sites, which we managed to find. A separate note is devoted to our time and work at LIOB cemetery.

Kvas at the Railway Station Area
Berdichev’s railway station, dating back to 1870, is located at the east end of the town’s main street – Karl Libknecht. The orange and white coloured building is rather beautiful with many arched windows and doors. It appears that at a certain stage [probably after 1917], the building was topped with a tower at the crown of which presides the famous Russian Star. [photo-1]. 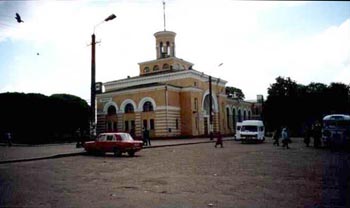 In front of the station there is a spacious area where a few dusty and time-worn cars serving as taxis are parked. To us, the most amazing and heart-warming sight was the little blue tanker, parked on one side, on which the word KVAS was painted in yellow. A lady sitting in front of the tanker was selling this barley-based drink through the tanker’s spout and tap. Kvas should be well known to those who are familiar with Shalom Aleichem stories. Personally, I never knew that Kvas was a real drink — I took it as one of Shalom Aleichem’s funny literary inventions. I learned I was very wrong. 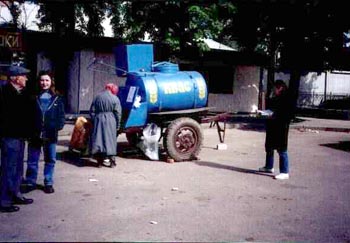 Kvas on the streets of Berdichev.

Progress Factory
From the railway station driving west along the main street we passed what used to be a Jewish factory called the Progress Factory. The building is still there, and it is still used as a factory. Today it produces machine parts.

Driving on along the main street one arrives at what was once the Sherentsis Theatre.

Sherentsis Theatre
Built by David Sherentsis [a physician, businessman, philanthropist and an uncle to the well -known war correspondent Vasili Grossman], the building, with its arched wooden doors and triangular roof, is set a little deep from the main road. It is still configured as a theatre and is currently undergoing some renovation.

The Oldest Jewish Cemeteries:
Further west along Berdichev’s main street we arrived at what were once the two oldest Jewish Cemeteries in town. As in many other former Jewish towns, the whole area was dug up and converted into a park named after Ukraine’s national poet and writer Taras Shavchenko. 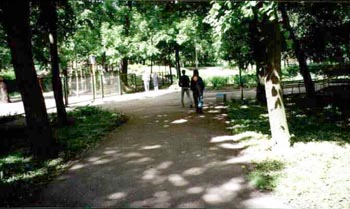 At one corner of the park there is a single stone surrounded by railings – a symbolic reminder to a curious visitor of the former use of this area. If there was any inscription on this stone, it is no longer discernible by the naked eye. Hence, even a curious visitor would have a hard time working out the meaning of this stone. 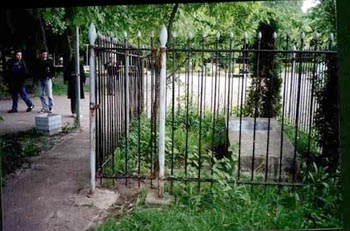 The Search for One of the Many Old Synagogues:
From Shavchenko Park we drove, looking for an old synagogue in the area of the ‘Bazaar’ [market square].This is the area south of Shalom Aleichem Street, in the direction of the Gnilopiatka River, on the banks of which Berdichev is situated.

We did not find the building so at a nearby police station we stopped to ask. We were advised to look for a very old couple living down the road. This couple, we were told, know all there is to know about old Berdichev. We strolled on looking for this couple and it was not long before we spotted an elderly man carrying two buckets of water. We stopped him and after a couple of seconds ascertain that he was indeed “our man”. We offered to help him with the water only to hear him reply with a smile – “I am only 82; I should still be able to carry these buckets”. He carried the buckets to a next door small wooden structure, straight out of ‘Fiddler on the Roof’, and called his wife. 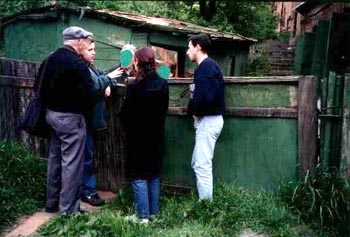 The old couple from Berdichev. Their residence had formerly been a Jewish home.

At first they were reticent to talk to strangers, but after a few seconds, the ice broke. We learned that the couple had bought their residense 70 years ago. It was a “house” in the midst of a totally Jewish area. The “house” did not change since they bought it. From our short encounter we learned that the wife went to school with Jewish girls and still recalled some Yiddish and that the synagogue which we were searching for, was long gone! We also got the message that life in Berdichev today is no “milk and honey”.

An Old Flour Mill that has Disappeared:
We looked for the old Jewish flour mill, which used to stand on the northern bank of the river at the western edge of the town, adjacent to what is now the bridge leading to Zagrabellia. There was no trace of this mill and we were later advised that it had disappeared many years ago.

Over the Bridge to the Still Magnificent Magazinik House: The Magazinik house is located at No. 22 Voikova Street [formerly Chudnovskaya Street] on the south side of the river. It is close to the pedestrian bridge that stretches over the Gnilopyatka River. The house, built in 1890, was once the residence of Avraham Dov Magazinik and his wife Feiga, daughter of Rabbi Baruch from Chernobyl.Built in the form of a small palace, the house stands in the middle of what was once a beautiful garden. Despite the fact that its condition has deteriorated, the house still retains an aura of magnificence. It is decorated in a predominantly light blue colour with Stucco ornamentation. 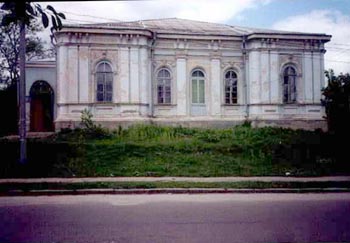 Today the building is home to a branch of Berdichev’s library, containing reference, children and general books for lending. There is no computer in the library so the library’s index is on cards.The librarians, who were most hospitable, showed us old photographs of Berdichev and advised us to visit a second Magazinik building down the road.This second building, today home for a school of 800 pupils studying in two shifts, is large and of plain style. The building has been renovated and expanded over the years. However, its front still has the original arched wooden doors on which there were two wooden carved lion heads. One of these, was recently given to a descendant of the Magazinik family, who came from the USA for a visit. [Can you help us to trace this man ?].

Sverdlova Synagogue: The only operating synagogue in Berdichev is on Sverdlova Street, which is located between the town’s main square and the river. The synagogue, which used to be “The New Beit ha’Midrash”, has been renovated within the past 10 years and its exterior is painted light blue. It has arched windows, each decorated with two Magen Davids and a Menorah. During the restoration, a plaque on one of the internal walls of the synagogue was uncovered, listing six members of the Hirschenhorn family who lived in Berdichev between 1908 and 1952. 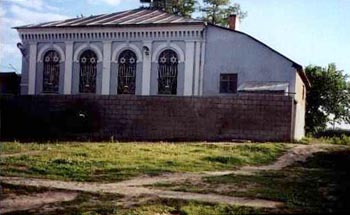 Carmelite Monastery
Although not Jewish, this impressive site appears on many old postcards of Berdichev. The monastery is strategically situated on a small hill overlooking the river and is partly surrounded by fortifications. The site dating back to the 17th (?) century is currently being restored.

The Local Archives
We could not leave Berdichev without coverage of the local archives. We started with the address quoted in Miriam Weiner’s book “Jewish Roots in the Ukraine…” There we found a notice saying “We have moved !” It took a full-blown discussion with five elderly ladies, who soon gathered around us, to find the new location – back entrance of a building at the other side of town – no signs whatsoever!

At this second location we were warmly received. The lady at the desk did her best to find us an old map of the Berdichev area and confirmed that no vital records are held there. We were directed to a third address, where we received a rather harsh “telling off” for not knowing that the archive was closed. After all, it was Friday!

With some perseverance, we managed to get confirmation that any pre-1920 vital records which might have survived, would be in Kiev.